Cricket Beyond the Bazaar: the revival of a classic book

81 All Out  > Books >  Cricket Beyond the Bazaar: the revival of a classic book 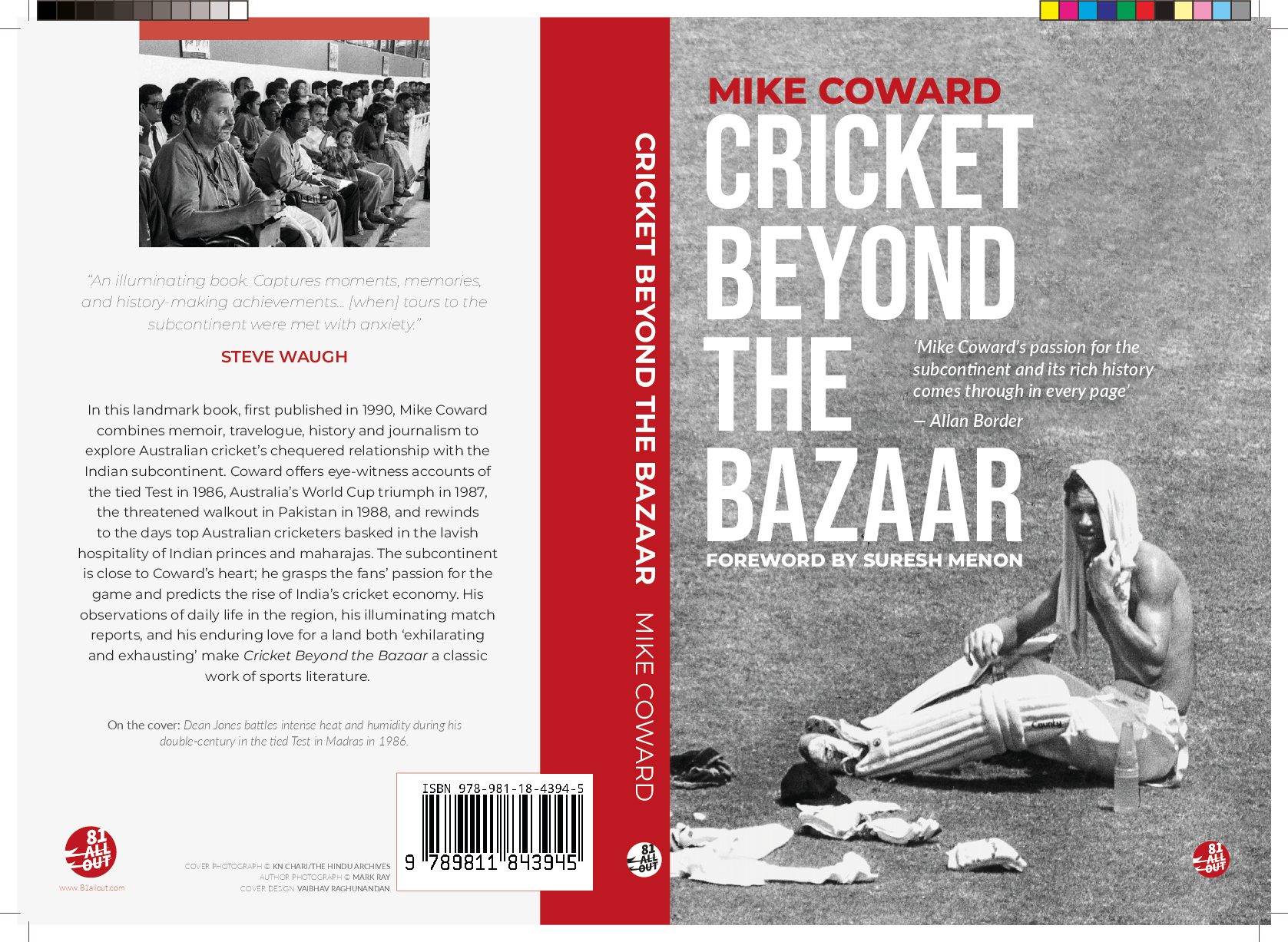 We are delighted to announce the republication of Cricket Beyond the Bazaar by the revered Australian journalist Mike Coward.

First published in 1990, this landmark book combines memoir, travelogue, history, and journalism to explore Australian cricket’s chequered relationship with the Indian subcontinent. Coward offers eye-witness accounts of the tied Test in 1986, Australia’s World Cup triumph in 1987, the threatened walkout in Pakistan in 1988, and rewinds to the days top Australian cricketers basked in the lavish hospitality of Indian princes and maharajas.

At a time when many Australian cricketers were wary of visiting the subcontinent – and when the Australian media ignored many of their matches in India and Pakistan – Coward assiduously documented the struggles and triumphs of Allan Border, Dean Jones, David Boon, Craig McDermott, Steve Waugh and many others. He grasped the Indian and Pakistani fans’ passion for the game and saw the rise of India’s cricket economy and the potential for an India-Australia rivalry.

The foreword for the new edition is written by the acclaimed writer and author Suresh Menon. “Even if Cricket Beyond the Bazaar were just about the tied Test and the ‘joys’ of touring and reporting cricket from the subcontinent in the 1980s, it would have been a classic,” writes Menon. “But it is much more: an Indophile’s paean to a country that provides a ‘constant and strident reaffirmation of life and a stark reminder of our tenuous hold on it,’ where the land is ‘exhilarating and exhausting….’ ”

The former Australian captain Allan Border was glowing in his praise for Cricket Beyond the Bazaar:

“Mike Coward absolutely loves the subcontinent. The people, the culture, the chaotic nature of everyday life, everything! This passion for the people and its traditions, as well as its rich history, comes through on every page.”

This republication is the second book from 81allout Publishing. In November last year, we republished Mike Marqusee’s acclaimed book about the 1996 World Cup War Minus the Shooting.

A lifetime in cricket writing – 81allout podcast with Mike Coward

The subcontinent beyond the cliches: revisiting a landmark cricket book – Dan Brettig and Russell Jackson discuss Cricket Beyond the Bazaar – 81allout podcast

War Minus the Shooting: revival of a cricket classic – 81allout

A note from Siddhartha Vaidyanathan and Mahesh Sethuraman:

This journey was made possible by many helping hands. A big thanks to:

Mike Coward for trusting us with the distribution rights; Suresh Menon for offering to write the foreword; Allan Border for talking about his experiences of touring the subcontinent; Vaibhav Raghunandan for the expert cover design; Mark Ray for helping us with the author photo; Hriday Balachandran for proofing the manuscript; Daniel Brettig and Russell Jackson for the podcast; Sharda Ugra and Clayton Murzello for their unflinching support; ; Ashoka Rao and Deepauk Murugesan for being part of the 81allout journey; and – most importantly – all our listeners and readers who have driven us to aim higher and do better. Thank you one and all.