The theatre of spin 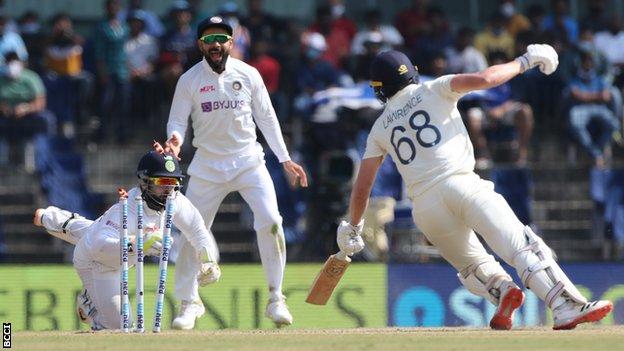 I grew up at a time when India won (nearly) every Test at home and lost (nearly) every Test abroad. The phrases that punctuated newspaper reports back then: ‘designer pitches’, ‘underprepared pitches’ and ‘doctored pitches’. The players were ‘tigers at home, lambs abroad’, prospering on tracks they knew only to be exposed on alien pitches away. It was easy to succumb to this line of thinking. Through the 1990s India were outplayed on their tours to Australia, South Africa, and New Zealand. They collapsed on a seamer-friendly track in Edgbaston (which cost them a series) and were flattened for 81 when chasing 120 on a bed of thorns in Bridgetown (the only result in that five-match series). For the team to have any chance abroad, the reasoning went, the surfaces at home needed a drastic overhaul.

What this meant was that each Indian win at home was invariably judged through the prism of defeats away. The preternatural ability that India’s batsmen possessed against spin, the mastery of their wicketkeepers standing up, the subtlety involved in setting fields for a range of spinners, the genius of Anil Kumble, the challenge of facing spinners in tandem, the sheer delight in watching batsmen prancing down the track as the ball jagged off the surface – all were foregrounded by a sense of shame. How memorable would these wins be if the team could start winning abroad. How much more admirable would it be if these players could thrive in all conditions.

Few years down the road, pitches were revamped. Promising cricketers emerged from all corners. Players got fitter and there was a superior understanding of technique and nutrition. Batsmen sharpened their techniques on greentops. Fast bowling academies started producing results. The Ranji Trophy stopped being organized on zonal lines. Foreign coaches brought in their perspectives. And India began to win away. In 2004, they won their first series in Pakistan; in 2006, they won a Test in South Africa and celebrated a series win in the West Indies for the first time since 1971; a year later, they won a series in England for the first time since 1986; and in 2009, they won a series in New Zealand after 41 years. The following decade brought on further gains. India drew a series in South Africa, notched up three series wins in West Indies, two series wins in Sri Lanka, and became the first Asian team to win a series in Australia in 2018-19. For those who thought that was a fluke, they produced an encore – against a full-strength Australia, in more demanding circumstances – in 2020-21.

And yet, after all these years, it is hard for some to make peace with a turning pitch. The team maybe more than capable of competing across conditions but so acute is the hangover from years past that the mind sees a surface that turns from day one and goes: ‘Is this really necessary?’ Forget the former England players and “experts” terming the Chennai pitch a ‘sandpit’ and a ‘beach’ – they can at least be accused of ignorance – what of the Indians who are apologetic about such surfaces? To be alarmed by puffs of dust – seriously?

The pitch for the second Test in Chennai was no minefield. It was a turning track where spinners had an advantage. The good batsmen adapted. The two wicketkeepers shone through. Rohit Sharma, Virat Kohli and R Ashwin played exceptional innings. Ben Foakes and Joe Root batted for enough time to realize the surface wasn’t extreme. R Ashwin was expert with his change of pace and length. And Axar Patel was lethal with his fastish spin. There was nothing to suggest this was a dangerous surface. And it was amply clear that patience and technique could yield runs.

There is this belief that a “good pitch” must assist pace and seam for five sessions, batsmen for the next five, and spinners thereafter. This utopian ideal discounts weather conditions, soil composition, and home advantage. It also assumes that the best Tests are those where every style of practitioner has an equal say. But there is no reason for Test cricket to live by such puritanical notions. Pace and seam have had most of the say in many a great Test. So too spin. Adverse conditions and hostile bowlers often distinguish the good batsmen from the great ones. And some of the most legendary matches have attained that status because of the tricky nature of the pitch. A two-day Test may not be great news for the administrators and sponsors but try and take your eyes off a single ball. Go away for a session and you could miss an innings. So much is happening so fast. The ball rips, the batsman edges, the keeper leaps, the close-in fielders search for the airborne ball, the bowler screeches in anticipation, the crowd erupts. Ball after ball. Miss after miss. Edge after edge. The game is on the boil.

Kids in the Caribbean often learn the game on the beach. There is a thrill to bowling fast on the seashore, timing one’s run-up and the leap to coincide with the incoming waves. Many aim to pitch the ball on the thin film of water, and watch it zip towards the batsman’s head. Seeing the pace that the bowlers generate and the fearlessness with which batsmen hook and pull you get a glimpse of the stereotypical Caribbean style and swagger. For young Pakistanis, it is the lure of the tape ball and how magically it swings and curves. The writer Osman Samiuddin has written: “What tape ball did was emancipate the fast bowler on the streets, if not actively encourage everyone to bowl fast: in many ways the most natural thing to do in a game of tape ball cricket is to steam in and bowl quick.”

Most young Indians fall in love with the game in gullies, maidans, and on rooftops. They could be playing with a tennis or rubber or cork ball. It could be on a wintry morning or scorching summer day. But there is usually a time in these games when a batsman is surrounded by a gaggle of fielders, some standing within a bat’s distance, willing him to nick off. There is an electric field that envelops this set-up: the batsman must survive the bowler but also the ring of fielders standing around. To attack – and risk breaking a window? – or to defend and risk a close-in catch? To use one’s feet – and risk an embarrassing stumping? – or to stay back and trust oneself to read the spin off the track?

To see Ashwin fox Dan Lawrence with a ball that sneaked through his legs – and to watch Pant pull off that acrobatic stumping from way down the leg side, airborne as he took off the bails – is to be transported. To see the delight on the fielders’ faces – in what was clearly a planned move – is to share in the joy. Here was a gully cricketer’s dream move enacted in a Test match. A great bowler and an athletic keeper hatching a plot. A bunch of elite cricketers speaking for us all.

5 thoughts on “The theatre of spin”