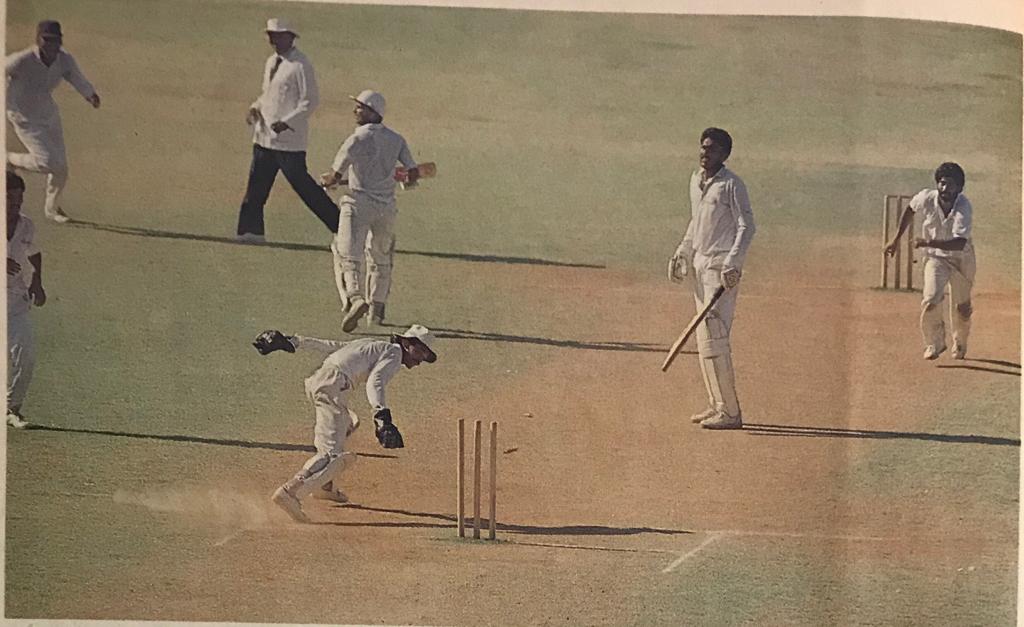 Every cricket fan remembers the first game they witnessed live in a stadium. I do too. I was fortunate to watch the semi-final and the final of the Ranji Trophy in the 90/91 season at the Wankhede Stadium. The final is probably the greatest first-class game played in India and I was privileged to have witnessed it live.

Typically a Ranji season ends in March but due to some legal disputes, the knockout matches of the 1990-91 Ranji Trophy were held in April and May. That suited me perfectly as I was in the middle of my summer vacations. I was based in Mumbai (then Bombay) for my vacation and the semi-final between Bombay and Hyderabad was the first ‘live’ game that I ever saw. Bombay, those days, was a star studded team and I still remember those that played that year – Rajput, Hattangadi, Manjrekar (c), Vengsarkar, Tendulkar, Kambli, Pandit (wk), Kulkarni and Ankola – all big stars for me. The biggest attraction was an 18 year old whose reputation was growing with each passing day. Sachin Tendulkar had not yet scaled the peaks which would make him the greatest batsman of his generation, but everybody in the country was already talking about him. Azhar had left to play for Derbyshire but Hyderabad still had Arshad Ayub, Venkatapathy Raju, and Kanwaljit Singh.

The most expensive tickets for the semi-final, priced at Rs 5, gave you entry to the Garware pavilion, which was right next to the player’s enclosure. I happily bought those and entered the stadium. Mumbai batted first and I remember how the three spinners – Ayub, Raju, and Kanwaljit – kept bowling over after over in the April heat. I have memories of Vengsarkar scoring a majestic hundred. I wanted to see Tendulkar bat and he came and got a quickfire 70. Kambli got a hundred as well. But my biggest memory is how Sanjay Manjrekar batted. He came at the fall of the first wicket and just kept batting. Kept going on and on, till he got 377. Manjrekar was all technique and concentration. Not one slog, not one bad shot in two days of batting.

Those were different times. I remember getting Manjrekar’s autograph as he waited roadside for a taxi. I remember a kind uncle taking me inside the stadium helped me get Vengsarkar’s autograph. This match started on April 24, which was Sachin Tendulkar’s birthday, and I remember he cut a cake in the Garware pavilion during tea time and signed a few autographs. Bombay scored 855 for 6 declared. Hyderabad replied with 498. And Bombay won easily by virtue of the first-innings lead.

But the cricketing feast was not over. For Bombay’s opponents in the final were the Kapil Dev led Haryana who had never won the Ranji Trophy. What a final it was going to be. Apart from the great Kapil, Haryana had Chetan Sharma and a young Ajay Jadeja in their team. Kapil was desperate for a Ranji Trophy win. Nothing was going to stop me from being at the Wankhede.

Haryana dominated the first four days of the final, getting a significant first-innings lead. But Bombay fought back on the fourth evening and the final morning. Even then, the Haryana tail wagged and it meant Bombay were set 353 runs in about 65 overs to win the Ranji Trophy. You have to remember this was in 1991. Teams on an average scored about 220 runs in a 90-over day. A target of 353 in little over two sessions was seen as virtually impossible. Most people around me felt that the game was gone as far as Bombay was concerned. Their belief grew even more when Bombay was reduced to 34 for 3. Enter Sachin Tendulkar.

Tendulkar at that point was a teenage prodigy capable of producing moments of magic that showed us glimpses of his future. He was not yet the reliable, consistent, solid player he would turn out to be in the course of his magnificent career. He was an exciting strokemaker who could thrill or disappoint. That day he walked in with the sole purpose of destroying the Haryana attack. He scored 96 in 75 deliveries, an innings which was studded with incredible strokes. One particular shot will never be forgotten by anybody present at the Wankhede that day. Tendulkar charged down the track to Kapil Dev and smashed him straight over his head for a six – the ball landing directly on the sightscreen. If there is a moment that is going to be stuck in my mind that was it. Even now I get goose pimples thinking about that moment. An 18-year-old boy smashing India’s greatest fast bowler over his head for a six was just ridiculous. Kapil would later confess that he was convinced at that moment that his career was coming to an end.

As tea time approached the Mumbai supporters started to believe. An uncle next to me suddenly became confident. Mumbai cricketers know how to win, he told me. Watch how Sachin and Dilip clinch this. The fact the he addressed them on a first-name basis convinced me that he knew them on personal terms.

The Wankhede started filling up and the atmosphere became electric. However when he had the bowling at his mercy, Tendulkar fell, hitting a full toss straight to midwicket. “Now the game is gone”, I said to myself.  “No No”, the uncle said confidently, “Vinod is there”. Young Vinod Kambli came and played a superb cameo. Vengsarkar at this stage was batting like a master, giving the strike to the young guys and punishing the bad balls. Bombay were within 120 runs of the target when Kambli fell. “Chandu Pandit has opened for India”, the uncle now said. Unfortunately Chandrakant Pandit couldn’t contribute much. Kulkarni and Patil were run out. Ankola fell soon after and at 305 for 9 the game appeared over. Uncle, glum face and all, was about to leave.

That’s when Vengsarkar, who was suffering from cramps and batting with a runner, launched into a ferocious counter-attack. He played some breathtaking strokes and while with every shot the target was being trimmed, there was also a fear that he might get out taking another risk. But everything he tried came off. I still remember the scenes: Vengsarkar having mid-pitch conference with Lalchand Rajput, his runner, and Kuruvilla, the last man. Kapil Dev asking his team to be calm. Kapil Dev having discussions with Chetan Sharma and other Haryana players. The crowd wondering what will happen next ball. These pictures are so clear in my mind, as it all happened yesterday

Vengsarkar was batting on auto-pilot. Every time Kapil plugged a gap, Vengsarkar found a boundary in another part of the ground. Runs were being counted down. There were eight boundaries in four overs and Bombay had quickly moved past 350. An unlikely victory now appeared certain.

But with the score at 353 and with just two runs required, Vengsarkar’s runner Rajput got in a horrible mix up with Kuruvilla and the last Bombay wicket fell courtesy a run out. Young Kuruvilla was distraught and Vengsarkar fell to the ground, tears streaming from his eyes. The Wankhede was stunned. It took me a while to grasp what had happened. Kapil Dev led his team off and lifted the Ranji Trophy.

The memory of this game still lingers. The atmosphere at the Wankhede that day, particularly when Tendulkar was batting, and as Vengsarkar nearly pulled off a Houdini was unbelievable. It was a privilege to have witnessed one of the greatest finishes in first-class cricket.

Lead image from the Sportstar collection of @subbsy